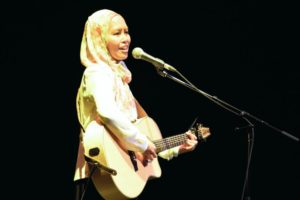 Audrey Saparno is a singer-songwriter born and raised in Ottawa, Canada. Her music is acoustic soulful folk with a slight R&B twist. Her lyrics vary from stories of women empowerment to spiritual love to finding hope through life’s challenges. Musical influences include Dawud Wharnsby, Lynn Miles and Joni Mitchell whereas her voice has been compared to that of Jane Siberry and Sarah McLachlan. Her writings give a view to a Muslim woman’s perspective that is both refreshing and not often heard.

In 2013, she met through the internet the American artist Raef, and co-wrote their first song (hopefully first of many), “Dream” as a pet project. “Dream” later got produced and recorded onto Raef’s debut album “The Path” released in 2014 with Awakening Records. In 2014 her song “She Misunderstood” won the Folk Music Ontario, Songs From the Heart, song-writing competition, under the Multicultural sub-category. In 2016, she worked with James Stephens, Stove Studios, Chelsea, QC, to finish her debut CD, Beauty Inside, released last October.

Audrey has performed in numerous venues across Ottawa including the Centrepointe Studio theatre, the University of Ottawa Alumni theatre, All Saints Event Space, the Rainbow bistro and Pressed Café. She will be performing at the Record Centre for JUNOfest on March 31st. She is so grateful to be part of the Ottawa Grassroots Festival this year.

Song writing has become a way for her to express her spirituality and her stories in a folksy sort of way. Hoping to unify people through universal themes, she shares her songs with the heart of whomever her songs can touch.