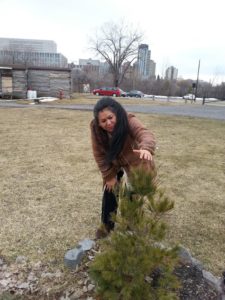 Doreen Stevens, Local Artist Algonquin Kitiganzibi, Quebec . Spirit name Anamitagize-Odaying” One who speaks with the heart. “Actress Singer -Songwriter Spoken word Multi talented visual Artist 3rd year student Indigenous Theater school Toronto Ontario.featured in various films and performance Art throughout Europe, Australia , and USA and Canada. Art Exhibits “The creation Story.” Mosaic Turtle depicting the Algonquins of the great lakes region on Turtle Island ,the Wampum belts, the elements and water the blood life of mother earth. Aki. Turtle Island conservation ,First Nations Art Garden, Toronto Zoo . Danforth-perth community Center Art garden Toronto. Mosaic outdoor bake oven. A community development project Red-pepper Spectacle Arts .” Aninatig”meaning medicine and is a means of survival and is still used in our ceremonial sugar moon. The four colours of leaves represent four medicines, directions along with the Kokoom grandmother watching over us. As well as the depicting of the four seasons. mosaic entitled by Artist Aninatig ‘ maple tree. Sakahan Connecting Aboriginal Youth with Indigenous Art.National Gallelry of Canada . Doreen received a medal of Volunteer recognition award from MP depute Mauril Belanger for the Creation of the Wabano Street Theater on parliament Hill .The Art that rooted me to my culture” a short film documentary and music of her Cd entitled poetryaki songs for the Earth is the art that fuses her creativity together, it is a weaving of our stories. we all have a connection , a sound a vibration, it becomes stronger when we become closer to our own spiritual realm.” We weave our stories into it. it never breaks. When were with the creation , outside , we our outside of ourselves, in it, working for it, stretching it, weaving it , binding it, together. We all have ties, and we are all unique, so, when we call one another, or what we call one another identifies that uniqueness. kaadamo or Anamitagize-Odaying. is my spirit name. One who speaks from the heart. Creativity is a multi-layered connectivity of spiritual formation in motion.

Doreen Stevens is an acress/singer and third year student at Centre for Indigenous. Credits include:The sacred Gift, Red Earth White Earth, Windigo, The Blood of the Hunter, Black Robe, Sheaweh, Participated in Olympics 2000 Sydney Australia, opened up for Ian Tamblyn at the National Arts Centre in 2007, Ottawa Folk Festival for Natalie McMaster. Stage Venues: “Love me directed by Spider Woman Muiriel Miguel, Forgive those Who Trespass by Arturo Fresione. Healing Mother by Judith Thompson in the Leaves of Forever national Tour, White Buffalo Calf Woman play 2008 Narrator and Spirit Woman The Sacred Circles, A play on family violence Conference Saskatchewan directed by Bruce Sinclair, The Blood Remembers workshopped by Thompson Highway and Veronique St Pierres, The Rez Sisters in 2008 in Toronto. Received Volunteer recognition Award through Parliament in 2001 for the participation in the Creation of Wabano Street Theatre, Performer in the band Nime which means “She Dances”.