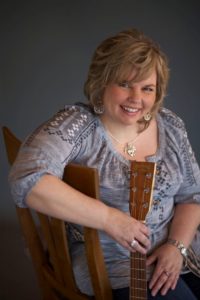 For French Canadian singer/songwriter Francine Leclair, her latest project entitled “Re-Drawn” encourages listeners to have a new vision for their lives. Her songs from the album tell the story of relatable and inevitable life changes all of humanity experiences through various seasons, and provide hope in the uncertainty of such change. Influenced by artists like John Denver, Annie Lennox, Bruce Springsteen and Jason Mraz, Leclair’s approach to songwriting shows that it’s never too late to bravely embrace change no matter what the obstacles.

Leclair recently faced the uncertainty of change by retiring from the computer technology industry where she built and managed large web-based systems to focus full-time on the music that’s been lying dormant in her heart since her childhood and teenage years. “I admit I’m getting into this somewhat late in life,” she says. “But when my 18 year-old daughter and 16-year-old son, kept telling me to “Get a life Mom!” they really were showing wisdom beyond their years.  After spending time thinking about what my life would be after they left the nest. I realized I had stories to share, and there was still an opportunity for me to at least try and turn my musical hobby into my profession.”

“My son was worried about what I would do after he left the nest,” says Leclair, “so at his encouragement, I started writing songs again.”

Since 2013, Francine began doing songwriting full time. She completed the Professional Singer/Songwriter certification from the Berklee School of Music and continues to take songwriting workshops. She is the co-ordinator for the Leamington/Windsor Regional Writer’s Group.

Once Leclair began to bravely re-draw her life with lines of music, her story book started to become more colourful. She took risks by leaving her federal government job in 2013 and pursuing music full-time, playing her original songs to audiences, including ones she had written for family members to mark the milestones in her loved ones’ lives. These songs were released on a self-produced album called ”An Ordinary Person?” in 2008.

Leclair took this new career seriously and has since graduated from the Berklee College of Music Professional Singer-Songwriter Certificate Program. Francine continues to improve her writing and has been mentored in Nashville by songwriting giants Beth Nielsen Chapman (co-writer of “This Kiss”), Mike Reid (co-writer of “I Can’t Make You Love Me”, Jonatha Brooke (songwriter and playwright of the musical ?My Mother has 4 Noses?) and Mary Gauthier.

Dreams of one day playing in a band and having an album professionally produced in Nashville seemed so far away as a child. Late in 2014, Francine realized these dreams with the release of her album “ReDrawn?” which was produced by Lang Bliss at Diff’rent Wirld Productions in Nashville. This album includes the song “I Soldier On’ and it’s French partner “Je Vis Sans Limites” which support the Soldier On fund in Canada. This was followed by a successful launch with a small tour in Ontario. A live DVD of the Ottawa release party is available.

In 2015, Leclair re-recorded many of her first songs from the 2008 album in studio and released them on an EP entitled ?An Ordinary Woman (In Studio)?.

Francine is an active member of the Songwriter’s Association of Canada, Folk Music Ontario and the Nashville Songwriter’s Association International. She co-ordinates the Leamington/Windsor Regional Writer’s Group which meets monthly with the goal of mentoring other songwriters and carrying on the tradition of folk music. “A folk song is always evolving, being sung by others and therefore embellished and improved upon while keeping the essence and message of the song alive for generations to come,” she explains. ?”That’s what I aspire my songs to become,messages of encouragement for the present and the future.”

Her songwriting has brought her to Nashville and Austin Texas as part of the Canadian Showcase at the Texas Songwriter’s Association opening for the Texas Music Legends Hall of Fame Induction ceremony to playing at local farmer’s markets. She has performed in the UK, Switzerland, the United States and in Ontario.

2017 is already off to a great start as she represented Canada for a second time in January at the Texas Songwriter’s Symposium as part of the Canadian Songwriter’s Showcase in Austin, Texas and will be performing in April at the Ottawa Grassroots Festival. 2017 will also see the release of Francine’s third studio album entitled “?To Be Continued?”.

Francine has been working on writing and recording those songs in her catalogue of songs of which many have “finish later” written on the bottom.. She travels to Nashville every few months to Austin Texas yearly to share her music with others, gain valuable feedback on her songs from mentors and pitches her songs to other artists. She wants to be known as a songwriter above all else, however, her voice has been described as having the gusto of Wynonna Judd to the sweetness of Joan Baez.

Leclair is living her dream, writing, recording and performing her songs live. She hopes that her story inspires others to do the same.