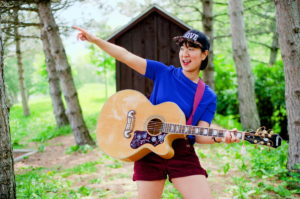 Janice Jo Lee (she/her), aka Sing Hey, is folk artist of Korean ancestry. She is a contemporary folk-soul musician, spoken word poet, playwright and educator from Kitchener, on Haldimand Tract treaty territory. Lee is passionate about building flourishing communities based in justice and joy through art. On stage Janice performs vocal looping songs, with her trumpet, Korean jangu drum and guitar. She is known for being disarmingly hilarious, off-the-cuff and fearlessly honest. She is a hard femme, queer, radical, comedian, truth-teller and trickster. She believes in the power of storytelling to build a bridge across difference and bring people together. Her latest compositions are Ancestor Songs, wailing and heart-wrenching melodies full of power and ferocity.

Janice has performed across the country including at Verses Festival of Words (Vancouver), Artswells (Wells, BC), Breath In Poetry (Edmonton), Word Up (Regina), Tonight It’s Poetry (Saskatoon), Home County Festival (London), In the Soil (St Catharines), Hillside (Guelph), Small Word Music (Toronto), and YouthCanSlam (Ottawa). In Waterloo Region, she was voted Best Performance Artist four years running from 2016 to 2019. Currently she lives in Toronto performing with her trio, and organizes with SpeakNORTH, the national spoken word organization. Stay tuned for her upcoming albums Ancestor Song, and Lonely is the Lullaby.