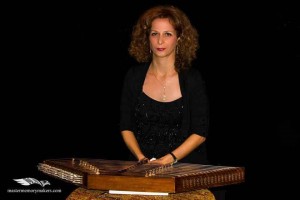 Katayoun Malekmotiee was born in Iran. She began studying music at the age of 9. After the Islamic Revolution,  music was forbidden and all the music schools were closed. She went on to study Economics, but after 8 years the prohibition against music was lifted and she obtained a music degree. She then began teaching music and santour, a traditional Iranian instrument.

Katayoun has worked with many music groups as a player and composer. She founded a women’s music group and opened her own music institute 10 years ago.  She has performed extensively in Iran and abroad and has recorded a number of CDs. Katayoun moved to Ottawa, Canada two years ago and she is thrilled to be introducing her music to a Canadian audience.