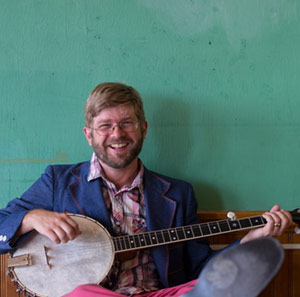 See also: http://oldmanluedecke.ca
Old Man Luedecke isn’t afraid to put his neck on the line. His latest album, Tender Is The Night, goes beyond his beloved solo, banjo-driven folk tunes. Driving a Nashville band from beginning to end with his recognizable voice, this is an artist honing his cunning lyrical flair – tenderly pushing the boundaries of his storytelling with his unique mix of folk, bluegrass and pop hooks.

Old Man Luedecke has a penchant for language. Based in Chester, Nova Scotia, the award-winning roots singer-songwriter’s latest album, Tender Is The Night, gives nod to F.R. Scott Fitzgerald’s famous novel, a title lifted from John Keats poem, ‘Ode To A Nightingale.’

With skillful precision and a storyteller’s heart, Luedecke’s narrative-driven folk songs are playful, coy, and soul warming. Rich in metaphor, heart and instrumentation, Tender Is The Night muses on love, art and purpose.

“I am running like everyone else. Laughing just to keep from crying. I am always trying to find a way to express,” says Luedecke. “I am a prisoner for my appreciation for language; language that moves me is language that is unusual. I feel like it’s an important thing I can contribute to songwriting.”

After touring the globe, winning multiple Juno Awards, and becoming a father to twin girls, Luedecke has finally found confidence in himself, and his art. Tender Is The Night is a balancing act, a collection of songs artfully crafted, and tenderly performed.

“The songs are about a variety of topics, a meditation on art and ambition is present in a lot of what I do. Art and whether there is spiritual success without worldly success, that’s at the heart of Tender Is The Night,” says Luedecke.

As Nashville provided an inspirational backdrop, Luedecke surrounded himself with the top players in folk and bluegrass music, including: multi-instrumentalist and producer O’Brien, bassist Mike Bub and drummer Kenny Malone.

“I have always liked and modeled myself on the ruffian qualities, I was attracted to the purity, misguided notions, and honesty,” says Luedecke. “I love Tim’s playing. I listen to his records all the time. He’s top of the heap, in my mind, when it comes to traditional music, specifically American music.”

“Kingdom Come,” opens the record with a heart rendering declaration of belonging. “Jonah,” explores a character struggling, crying out from inside the belly of a whale. “Tortoise and the Hare,” is an ode to the push for success. With splashes of somber sentimentalism, “Little Stream of Whiskey,” leaves listeners savouring the last sip.

“A&W,” cheekily pokes fun at post-bar boozy cravings, where a cabbie and drunk find themselves at a drive-thru. “This Might Hurt A Bit,” gets your toes tapping, and sifts through the endless layers of love. “Tender Is The Night,” is a poetic and pensive testament to longing. “Long Suffering Jesus,” closes the album with biblical flair and optimism.

“These are songs of reassurance, the only way I can reassure myself is writing uniquely and successfully as possible,” says Luedecke. “Pop songs are all about how things are going to be okay, music should make you feel good.

“The way I can make you feel good is saying the decisions that you make that aren’t popular, or going with the mainstream, are going to work out.”