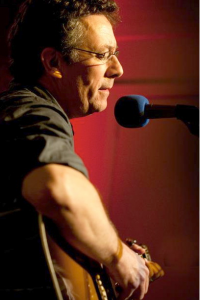 Tony Turner is a product of the Ottawa’s rich roots music scene. His thoughtful and sometimes amusing tunes reveal his love of history and landscapes and a love of the precious moments of ordinary people. Blessed with an expressive baritone voice Tony has recorded two CDs – A Matter of Time, produced by Ian Tamblyn, and The Lost Sketches, produced by James Stephens and is currently working on a disc of new material with Keith Glass (Prairie Oyster). Tony also has fun playing guitar and singing pre-1950’s forgotten gems with Shirt Tearing Boys, Ottawa’s favourite soup kitchen band, as well as organizing musical events for songwriters like the Great Canadian Song-Along. Tony’s anthemic “Circle of Song” was recently recorded by Ottawa’s Tone Cluster choir and later this year will be published in Rise Again, the sequel to Rise Up Singing, the popular folk singer’s sing-along book.