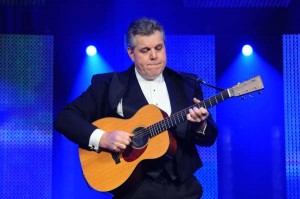 Wendell Ferguson started playing guitar at 7 years old. As he says, “It’s taken me over 40 years to become a child prodigy.”

He’s won the CCMA Guitar Player of the Year 6 times (1995 to 2001). Received a Juno nomination for his band Coda the West. Plus his live CD “The $#!T Hits The Fans” was nominated for the Album of the Year (2006 CCMAs). “Ménage A Moi” is his first all instrumental CD and it’s aptly named. He played all the instruments on it himself and recorded it in his home studio. It’s a throwback to his guitar heroes, Chet Atkins, Merle Travis and Jerry Reed. All original tunes with the focus on melody. Because as he says, “If you can’t sing it, whistle it or hum it, it ain’t much of a tune.” The album won the 2010 Canadian Folk Music Award for “Best Instrumental Album”. Wendell has garnered 9 CCMA Awards, an OCPFA Lifetime Musician Award and was twice nominated for a JUNO. He is proud to be appearing at Ottawa Grassroots Festival.