Equal parts musical musings, and fashionable theatrics, Captain Dirt & The Skirt are reinventing what it means to be a duo. United by their mutual love of musical adventure with a mysterious twist, their debut album The Adventures of Captain Dirt & the Skirt draws on bluegrass, hymnal, gypsy-jazz, classical and pop with the undeniable grit of rock layered throughout.

Coming from their own independently successful music careers, Kristin Sweetland and Lyndell Montgomery are seasoned road-warriors, having toured extensively nationally and internationally for more than a decade. Now they have joined forces with all their experience to create unique and original music together. 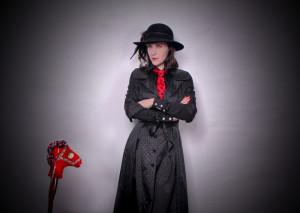 Kristin Sweetland, aka: The Skirt, is a guitarist, singer, songwriter, photographer, record label owner, and international touring road warrior. She has released 2 CDs and 2 EPs, won an award from the Ontario Council of Folk Festivals “Songs of the Heart” competition, and is currently working on her first book of photography “Adventures in Sweetland” – a chronicle of the selfportrait series she has been working on for the past 15 years. Hailed as one of Canada’s “hottest guitar players” Sweetland has performed at major festivals across Canada, the Unites States, and Europe, and served as emcee at many Canadian festivals and arts events. She sings in both English and French, and has taught numerous “Master Class” guitar workshops in both languages across Canada, the USA, and France. www.kristinsweetland.com 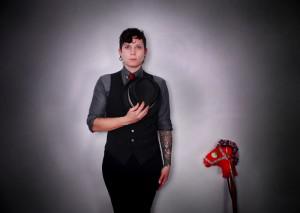 British Columbia born and raised Lyndell Montgomery, aka: Captain Dirt, is a multi-instrumentalist touring machine.  She has composed, arranged, recorded, booked, publicized and tour managed with countless artists around the globe.  Her musical experiences have taken her from India to Australia, Europe to North America and beyond. Lyndell is currently the producer of Beau’s Oktoberfest, an annual three-day music/culture/beer festival situated in Vankleek Hill, Ontario. She is also co-author of the widely acclaimed book Boys Like Her; Transfictions. Aside from composition, live performance, management and production, Lyndell works with the Alberta’s based Rocker Girl Camp and the Ottawa Blues Festival as a music educator.