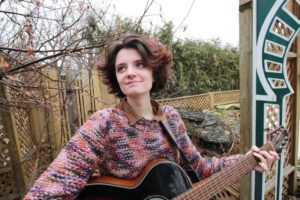 Clarissa Fortin grew up in the small town of Port Elgin, studying classical voice, hoarding overdue library books, and searching in vain for fairies on the shores of Lake Huron. After moving to Ottawa for university she took up guitar and began writing songs as a way to deal with homesickness.

Clarissa composes lyrical odes to spiders, birds, turtles, and occasionally humans. During the summer of 2017, she performed at the Maawanji’iding: Festival Canadiana in Owen Sound, and was selected as a Youth Discoveries performer at the Summerfolk Music festival. She also recorded and released an EP called “Nothing and Everything.”