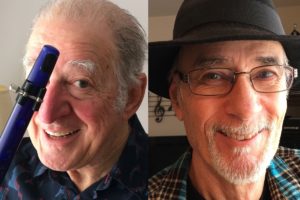 New songs and a new horn

David Mayerovitch and JP Lacroix have concocted a wildly varied set that will include Ottawa’s first public performance on the Xaphoon, an instrument that looks like the familiar recorder but uses a tenor saxophone reed to produce a vibrant and expressive  tone.

David Mayerovitch, who will play Xaphoon and ukulele, is a songwriter and comedy writer whose work has been produced on CBC shows including King of Kensington and Wayne & Shuster. At the Stratford Festival he updated and Canadianized the lyrics of his hero W.S. Gilbert for Gilbert & Sullivan’s The Gondoliers, and did the same at the National Arts Centre for The Mikado. Also at the NAC, he wrote scripts and lyrics for a number of gala events featuring major Canadian performers and celebrities. He was the author of book, music and lyrics for The Maltese Blue Jay, a murder-mystery musical set in Toronto and produced at the Kawartha Festival.

David specializes in songs that get a laugh. He’ll be singing “So You Think That You Can Fix Him”, which drew a comment on YouTube from a woman who wrote, “I wish I’d heard this song 40 years ago!” Two years ago he took up the Xaphoon and recently began performing with guitarist JP Lacroix.

JP Lacroix started playing the guitar at the age of 10. He is self-taught and began with classical guitar, but expanded into other genres. He’s played in bands of all kinds, including rock, country and disco. His classical background brings subtlety to his performance of Latin guitar styles.

He’s also a singer and has written a number of solo guitar instrumentals. JP is a much-admired performer at the weekly open mic sessions of Spirit of Rasputin’s, Ottawa’s folk music society. He enjoys sharing his music with others; his versatility and command of the instrument mean that he’s in constant demand by Ottawa-area musicians as collaborator and accompanist. He has been teaching guitar for 33 years.

The set will include originals by both David and JP, as well as a few of their favourites written by others.

The Xaphoon was invented in the 1970’s by American saxophonist Brian Wittman, who was asked by a young boy in Hawaii if there was a smaller sax that he could learn to play. Wittman cut a length of bamboo, added a tenor sax reed, and the Xaphoon was born. He made thousands of bamboo Xaphoons by hand, but to meet increasing demand launched production of the instrument in ABS resin. This injection-molded model matches the bamboo originals in quality of tone.