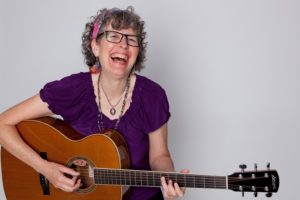 Singer-songwriter-parking lot attendant Jamie Anderson has played her unique original songs in hundreds of venues in four countries and is celebrating the release of her eleventh album, The Truth Appears. She’s folk without the Birkenstocks, country without the big hair, and jazz without the weird chords. Songs include everything from the tongue-in-cheek “Karma Café”, where the menu includes roasted crow and just desserts, to the more solemn “Black and White,” a thoughtful jazz number about growing older. She doesn’t really park cars, but her mama said she should have something to fall back on.

Jamie’s dad was a country musician, a painful thing for a teenager who would rather listen to Carole King, but it did mean there were always instruments lying around the house. She taught herself every chord in a Mel Bay songbook and started doing local gigs. Her first US national tour happened in 1987 because she needed to earn gas money to get to a music festival. She’s been collecting tiny motel soaps ever since. “… a barrel of laughs and a whole bunch of talent.” – Amanda Putz, CBC Radio.