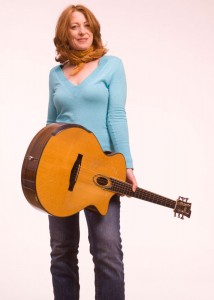 In a recent review of a show in Thunder Bay, Hubert O’Hearn of The Chronicle Journal wrote “Katherine Wheatley gave an absolutely transcendent concert. She is able to take minor observations in life and find their soul. On stage…she exudes sheer kindness and love. Blessedly, refreshingly, Katherine Wheatley is a truly Canadian original”. With offhand wit, vibrant lyrics and an infectious passion for performing, Katherine has been captivating audiences everywhere she performs. According to the Ottawa Citizen “This is a performer to keep you on the edge of your seat.”

Katherine graduated from Queen’s University with a geology degree and spent five seasons roughing it in the bush, gathering not only rock samples but material for her songs. It was only a matter of time before she left her tent and recorded her first CD, Straight Line. Produced by John Switzer, it spent 17 weeks on Sam’s Top Ten Independent Charts. Katherine’s second CD, Habits and Heroes, was produced by David Travers-Smith. It has garnered praise from fans and critics alike and has helped her to launch a strong touring career.

Katherine grew up in Parry Sound, Ontario. Her passion for songwriting began with a $13 guitar ordered from the Sears Catalogue. Years later, after four seasons working north of Flin Flon, Manitoba, she headed to Africa. It was there that a new found sense of adventure prompted her to write a journal and discover her own inner lyricist.

Katherine has been a regular at folk festivals, concert series and clubs across Canada since the release of her first CD. As well as her own career, she is a member of the Toronto band, Betty and the Bobs; is a guitarist in Wendell Ferguson’s trio “The Smoking Section”; she presents songwriting, vocal and independent music career workshops at schools, folk clubs and music stores across Canada; and she is the currently the ambassador for the campaign to raise six million dollars for the new hospital in her home town of Parry Sound, Ontario.

Katherine’s music has been used for documentaries, tv series and films. Among numerous radio and television appearances, she has been a featured vocalist on Stuart McLean’s Vinyl Cafe, as well as a musical guest on Morningside with Peter Gzowski, This Morning with Bernard St. Laurent, TVO’s Studio Two, and CBC Radio’s Vicki Gabareau Show. She performed her song “On A Beach In France” on CTV’s Canada AM and Good Morning Canada to commemorate the anniversary of Dieppe.

According to the Toronto Star, Katherine Wheatley “turns pebbles of every day life into dreamy mountains of song”. Warren Footz from SEE Magazine in Edmonton wrote “As a listener, it’s hard not to sit back, close your eyes and watch the movie play. And man, can this serene red head ever play guitar”.