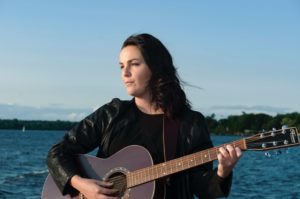 Sarah Howard is a bilingual singer-songwriter based-in Ottawa. Since 2015, she has been completing a Bachelor of Music in songwriting at Carleton University, under the mentorship of Lynn Miles. Sarah was set on a musical path from a very young age, as she spent days on end singing and creating songs in the peach orchards of her hometown, Niagara-on-the-Lake, Ontario. Sarah’s early influences are eclectic, including all of her mother’s favourite albums – from Mozart’s Eine kleine Nachtmusik and Nat King Cole to some of her favourite women songwriters, Carole King and Joni Mitchell. Later influences include favourite artists Leslie Feist and Laura Marling. Having spent part of her adolescence near Lille, France, Sarah is also an avid Francophile. Ultimately, folk is where her heart is, as she delivers bittersweet tales of travel, love, and loss with a jazz vocal style. In 2017, Sarah was finalist for the MusikOttawa showcase, with other performances at Remixed 2017 and Girls to the Front at Irene’s Pub. In 2018, Sarah will be graduating from Carleton and is currently working towards releasing a début EP about her hometown, entitled Niagara. Sarah is also a co-founder of Muse Collective (facebook.com/musecollectiveottawa), a community group dedicated to providing networking and professional development opportunities to women and girl musicians in Ottawa. This included an inaugural event to pay tribute to Canadian women in Juno’s, with more programming to come in 2018.