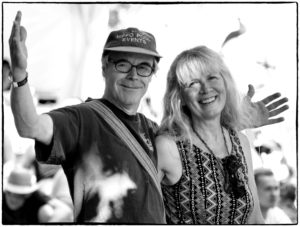 With musical roots firmly planted in the soil of the Canadian Prairies and the ever-burgeoning music scene in Guelph, Ontario, and with a passion for lyrical vocal harmonies, Canadian Folk Music Award’s 2008 Vocalist of the Year Tannis Slimmon has been singing, songwriting, recording and touring locally and internationally for over 35 years. With her 3 solo albums and numerous guest vocal appearances on others, including those by Willie P. Bennett, Valdy, David Francey and Rheostatics, her name appears in the credits of over 100 recordings. Through the years, Tannis Slimmon has been involved in The Bird Sisters, The Lucky Sisters, Boreal, Ondine Chorus, Essentia and has been described as “a breathtaking vocalist with a bright and angelic disposition” (Exclaim) .

Lewis Melville is a Guelph, Ontario, composer, producer, recording artist, and multi-instrumentalist (guitars, banjo, pedal steel, mandolin). A veteran of the alternative Canadian music scene, his various musical adventures have taken him across Canada, North America, Europe, Asia, and Africa. Lewis is well-known for his performances with Canadian bands Skydiggers, Rheostatics, and others. His playing can be heard on scores of albums by other artists (Cowboy Junkies, Bird Sisters, Bourbon Tabernacle Choir, Waltons, Kim Stockwood, 13 Engines, Tannis Slimmon etc.), including the multi-million selling album “Gordon” by barenaked ladies. Highlights of his musical career include producing an album of traditional Korean folk music with percussionist Dong Won Kim (Silk Road) and pansori singer Il Dong Bae, recording the traditional music of Tashi Nencha in Bhutan, and recording griot and kora player Mansa Sissoko and Wasselou musician Jah Youssouf in Mali, West Africa. Lewis performs with Tannis Slimmon, Banjo Mechanics, the Woodchoppers Association and the Silence Collective. His albums are available in Canada and worldwide through MapleMusic (www.maplemusic.com) or for download at Zunior.com.