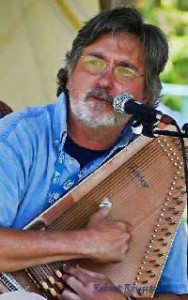 For more than a decade, Todd Crowley’s Musical Petting Zoo has been involved in the folk and bluegrass festival circuit in the United States and Canada.  It has appeared at close to 100 festivals and community events from Washington D.C. to Vancouver, British Columbia.  The Great Hudson River Revival, Mariposa, Summerfolk, Common Ground on the Hill, Old Songs, the Ogden Music Festival, Podunk Bluegrass, Winnipeg, Albuquerque, Ottawa and Washington Folk Festivals–these are just some of the many festivals where Todd’s Musical Petting Zoo has given countless children and grown-ups a like a chance to explore the vast world of folk instruments.

Besides being a touring exhibit during the festival season, Todd’s Musical Petting Zoo is also a community center and resource for promoting folk music and teaching.  It resides at 216 Maple Ave Corry PA 16407 where it hosts a weekly song circle and occasional house and community concerts.

Representing the musical alphabet from accordion to zither, Todd’s Musical Petting Zoo is a fully interactive, hands-on activity. Not only are festival-goers invited to examine the instruments, they are  encouraged to touch, play, and share what they discover.  All ages are welcome—from a child learning how to hold a fiddle for the first time to the old gentleman remembering Irish button accordion tunes.

The Zoo offers the usual instruments like the guitar, banjo, ukulele, mandolin, and fiddle.  But there are also a host of other folk instruments such as the kantele, cuatro, bouzouki, and dobro.   Dulcimers, autoharps and odd musical gizmos like saws and limberjacks also abound along with drums from five continents. And too many wind and percussive instruments to name.

This spirit of discovery is the inspiration of the zookeeper —Todd Crowley is a patient, caring man with a true love for folk music. “My belief about folk music is that it isn’t just music to listen to from a seat in the audience. Folk music is about making music of our own—on all levels—and then passing it on to the next generation.”

“The instruments have a common DNA,” says Crowley, “just like human beings.”  From a mouth bow to a Celtic harp, from an Andean charango to a Hawaiian ukulele, Todd’s Musical Petting Zoo is a vivid and tangible display that instruments, like people, are all interconnected.
Crowley believes a folk instrument is part of the folk tradition, where the sharing of one’s love and knowledge of the music, song and stories of the past help to keep the traditions alive. The instruments in the zoo tell a story of their own each time a child connects to the folk tradition by trying an instrument for the first time or an adult rediscovers the joy of making music.