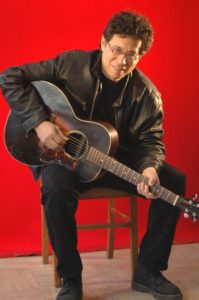 In 1969 guitarist / singer / songwriter Vince Halfhide began playing blues and reggae with the Ottawa band Heaven’s Radio.  Work with other artists (Sneezy Waters, Missy Burgess, Toasted Westerns, Ball & Chain, Andrea Karam, the Jivewires, Mighty Popo . . . ) added elements of country, folk, R&B, jazz and African music to his guitar style and established his reputation as a consummate sideman.  For years Vince has appeared every Thursday night at Irene’s Pub as a member of the “All Star Blues Jam” house band.

Of late Vince’s songwriting and singing have gained a growing audience who appreciate his unique take on blues, country, folk and roots music.  His lyrics, often simple on the face of things and full of nods to traditional sources, can change tone in an instant from playfully ironic to sadly beautiful.  Some listeners also report being surprised by the familiar, lulled into accepting the unexpected and being moved by stark truths gently delivered.