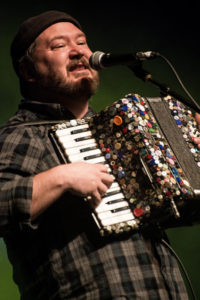 Jean-Marc Lalonde is best known as the accordionist for the traditional group La Ligue du Bonheur, as well as the folk-rock band Deux Saisons and his latest project Hey, Wow! With this rocking new sound, while still keeping a foot in traditional and roots music, Jean-Marc offers up playful songs that talk about the moments in life that stand out: the joys of falling in love, along with the chaos, break-ups and revenge that follows. He even sings about the typical arguments that every couple has at Ikea. The music can keep people dancing into the wee hours and the songs are ones everyone can relate to.

In 2014, Hey, Wow won the Songs From The Heart Award from Folk Music Ontario and Stingray Music for Best Francophone Song for C’est toi que ça me prend. In 2015, the group received three awards at the closing gala of the 34th Contact Ontarois: the Coup de Foudre Award, the Festival du Voyageur Award and the Festival Franco-Fête de Toronto Award.

“Traditional French Canadian music is on the leading edge of a resurgence in popularity and Jean Marc Lalonde is leading this movement” says Bob Nesbitt, Founder and Producer, Ottawa Grassroots Festival. “What better way to open a festival than with an evening of music which will definitely be one of those Hallmark moments”.

Tickets for Ottawa Grassroots evening performances and weekend passes are now for sale online on the festival website. They are priced to be affordable for families (children 15 and under are free when accompanied by an adult). The daytime events on both Saturday and Sunday are FREE for everyone!

The Grassroots Festival is a family-friendly gathering of folk music, dance and spoken word. This not-for-profit organization is run entirely by volunteers and -is proud of the participatory workshops it provides, cultivating community and nurturing inclusivity in a fun and friendly way.