The Blind and The Beautiful Open the Ottawa Grassroots Festival and They Do Not Disappoint!

Home 9 2022 Performer 9 The Blind and The Beautiful Open the Ottawa Grassroots Festival and They Do Not Disappoint!

On Thursday, April 21, The Blind and the Beautiful, opened the Ottawa Grassroots Festival. Creative Director, Ian Tamblyn, introduced them saying that when he first heard them at Irene’s Pub, he was blown away. He was so right, as they blew me away too. 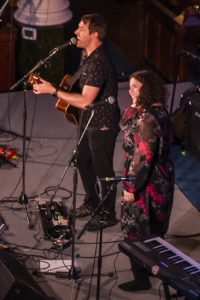 The Blind is Lucas Haneman and the Beautiful is his adoring wife, Megan (pronounced Meegan) Laurence. The way that she looked at him as he played guitar was heartwarming. Her eyes twinkled and her face shone, a beautiful smile, while her husband ripped away at the guitar. He was so impressive and truly one of my favourite acts in the festival.

Together, they are a dynamic duo, who are meant to be together. Megan’s sultry voice with Lucas’ phenomenal guitar tricks make for an amazing team and they are taking the world by storm. They are also in the Lucas Haneman Express, a four piece band that plays the blues and won them top five blues albums in Canada. Impressive indeed. 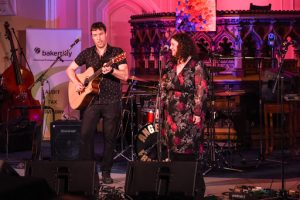 Lucas has been visually impaired since birth and started playing the guitar at the age of 6. He certainly has honed his craft well because he is probably one of the best guitar players around. Don’t take my word for it, Ian Tamblyn agrees, and he should know! A well known Canadian, folk singer-songwriter, producer and playwright, he was bestowed the Order of Canada, “for his enduring contributions as a folk music icon, adventurer and cultural ambassador for Canada.”

Ian told the audience, during the festival, that 98% of the acts are from Ottawa. Talk about supporting local musicians! Thank-you Ian, for bringing the Blind and the Beautiful. Don’t miss your chance to hear this husband and wife team, who will literally blow your socks off. theblindandthebeautiful.com