Sneezy Waters and the Marvellous in concert at Irene’s Pub, Sat. Nov. 12 at 8pm – Sneezy Waters’ book release ‘A Very Fine Biography’ will precede the show

Irene’s Pub, at 885 Bank St. in Ottawa, is a treasured spot to hear live music and this weekend is one you don’t want to miss! Sneezy Waters, (born Peter Hodgson) is 77 years young and credits his longevity to working as a stagehand for 25 years. He likes to keep in shape and is thrilled to be playing with his 5 piece band. He says the stage name “Sneezy Waters” is a long story that he outlines in his new book, which will be on sale for $20.00 at Irene’s on Saturday night. 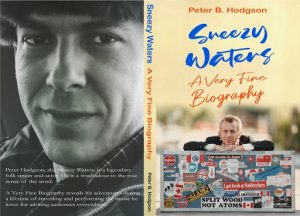 Sneezy started out his career playing throughout Ottawa, back in the 1960’s but is best known for  playing Hank Williams in both the stage and screen versions of “Hank Williams – The Show He Never Gave.” Of this incredible opportunity, he says three flukes happened by chance which led him to playing the lead role of Hank Williams, the film version was nominated for an Academy Award. He has been playing sold out shows at the National Arts Centre of Canada for decades, and it will be a real treat to see Sneezy Waters and the Marvellous, on Saturday night.

There will of course be a few Hank Williams songs, Woody Guthrie, Bob Dylan, etc. Sneezy has 25 songs picked out. He likes to perform songs from different musicians rather than his own music. When I asked him what he was listening to these days, he checked his phone to discover that he has 67 genres! He loves it all, from reggae to country and folk, but he really digs Jazz these days. Maybe he will play some Saturday night? You won’t know unless you come on down and check it out for yourself.

Sneezy’s own music is great, so I hope he plays at least one of his originals. 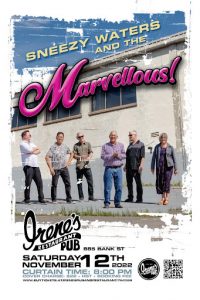 Tickets are selling fast. Hope to see you there!

Laurie Bowen is a freelance music journalist and screenwriter from the Ottawa area and can be reached at laurielynnbowen@yahoo.ca

Read More about the Book Launch on CTV News