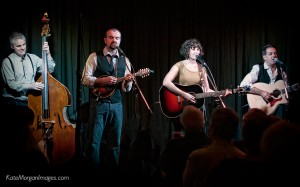 Amanda Bon formed her band in 2010 with the goal of recording and releasing the best of her songwriting up until that point. She assembled some of Ottawa’s most seasoned and talented players to complete her vision and in September 2011 they released their debut album, ‘Juniper Weekends’. Since then they have been playing regularly in and around town, steadily building a loyal fan base and gaining attention from local media.

Each member of the band (Danny Artuso, guitars, pedal steel; Ken Kanwisher, bass, accordion; Gilles Leclerc, mandolin, guitar) brings a personal touch to the overall sound and together they form a tight unit with palpable ‘good vibe’ on stage. Whether you want a chorus you can tap your foot to, jaw dropping instrumentals, strong lyrical content or catchy melodies, you’ll like this band. They keep the arrangements clean, their voices blend beautifully and each player’s talents are used to serve the song…because after all, the song still comes first.