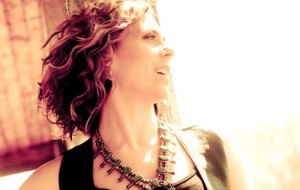 If Amanda Rheaume’s full-length debut album sounds a little too, well, good, for the work of a brand new artist, it might be because she’s really not that new.

Métis singer/songwriter Rheaume is a powerful vocalist with just a touch of grit and an instantly-accessible roots-pop-Americana sound.

A $40,000 winner in Live 88.5’s 2008 Big Money Shot competition, Rheaume is not only a regular at local festivals and joints like the Rainbow Bistro, she has also distinguished herself as one of the city’s, if not the country’s, most selflessly giving musicians. She organizes Ottawa’s Bluebird North songwriter showcases, she participated in the Babes for Breasts tour to raise money for breast cancer, she recorded a charity Christmas EP for Boys and Girls club of Ottawa – selling 6500 copies just in Ottawa, she donated a dollar from each album sold during her last tour to a fund for the families of military personnel, and she’s even performed for the troops in Afghanistan…twice.

Now, having paid her dues as a grassroots musician-in-the-community, and having cleverly taken her time to develop and refine her sound, Rheaume is ready to showcase her talents to a wider audience with Light of Another Day…a collection of catchy, country-tinged tracks, notable at times for their airy upbeatness and at others for their goose bump-inducing tenderness.

Much of the inspiration for the album comes precisely from the day-to-day struggles of the developing artist – the automobile breakdowns at the side of the highway, the uninspiring day jobs that help pay the bills, and, of course, the budding romances that die from too much distance. Standout tracks include “Better Days Ahead,” a celebratory ode to Rheaume’s musical friends, whose camaraderie helps her survive “in the trenches.” There’s also “Shadows of the Past,” an achingly plaintive piece about getting past self-doubt, “Be Your Enemy,” a freewheeling folk-rocker about trying to salvage a friendship from the remains of a relationship, and “There You Go Again,” a heartbreaking lament for a lost love. The album was produced by drummer Ross Murray and features Maple Blues Award-winning harmonica-player Steve Marriner of Monkey Junk on both harp and bass.

Raised in the capital, Amanda Rheaume began writing songs at 15, inspired by the second-generation “girls with guitars” like Ani DiFranco and Alanis Morissette. A year later, Sarah McLachlan and the Indigo Girls invited Rheaume to perform with them at Lilith Fair at the Molson Amphitheatre, where Rheaume had been hanging out backstage with her production coordinator aunt, Jocelyn Rheaume. Rheaume says that’s when the music business bug bit her, and Lilith’s spirit of musical community has never left her either.

Though most non-Ottawans have never heard of her, Rheaume has endeared herself to an enormous network of Canadian artists she now considers friends, including well-known names like Chantal Kraviazuk and Holly McNarland, the latter of whom cowrite “Kiss Me Back” for Rheaume’s latest CD.

Now with the release of Light of Another Day, non-musicians will finally have a chance to discover what those other artists have known for some time: that Rheaume is an instantly-likeable artist both on and off the stage and one whose got the voice, the sound and the songwriting chops to share stages with the best.