Concession 23 [kuhn-sesh-uhn] – noun.
1 to concede; agree; work together + 23 (the number of strings from a guitar, banjo, bass and mandolin).
2 a bluegrass band from the Ottawa Valley. 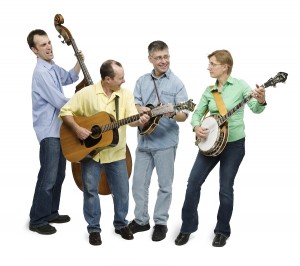 The band’s musical strength lies in its teamwork, its energetic playing style, and in the relaxed relationship it establishes with its audiences. The band is Jonathan Ferrabee (acoustic bass/vocals); Kevin Golka (mandolin/vocals); Sherry Philp (banjo/vocals); and Nick Strachan (guitar/vocals).

Concession 23 has been nominated in almost all categories at the Central Canadian Bluegrass Awards. After winning female vocalist of the year for five consecutive years, Sherry is now retired from the category.

Concession 23 has two full-length recordings, both nominated as “Recording of the Year” and is preparing for a third to be released in 2014. Selections from the recordings are played at radio stations across Canada and internationally.