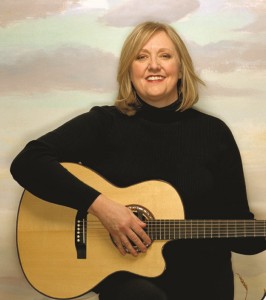 Also see: http://www.conniekaldor.com/
Saskatchewan, 1953; Connie Kaldor is born into a May blizzard that hits Regina on the heels of a heat wave. Her life has been a study in contradictions ever since, but this is a woman who weathers the changes. There’s no doubt, she’s prairie to the bone.

Music was a fact of life for Connie from the start. Her mother swears she sang from the cradle. She developed her range every Sunday in the local church choir, where Dad directed. Mom and Connie’s twin sisters played piano, and her brothers played guitar, tuba and trumpet.

In school Connie pursued her love of performing arts with a theatre degree from the University of Alberta in 1976. She went on to work with alternative theatre companies the Mummers in Newfoundland and Theatre Passe Muraille in Toronto, but ultimately it didn’t leave enough time for the music.

In 1979 she left theatre to pursue her musical career full time, setting out to blaze a trail on the Canadian folk scene (at places like the very first Canmore Folk Festival) with friend and then manager Jarol Boan. She packed her suitcase full of theatrical wisdom, threw her guitar into the back seat of an old Ford and she’s been on the road ever since. Female singer songwriters were somewhat unusual in those days, but nonetheless Connie sang solo and played guitar and piano herself; and broke with tradition even further by talking and joking with her audience, breaking down the wall that often separates spectator from performer. Her seamless combination of musical skill and engaging repartée still sets her apart today.

In 1981 Connie established an independent record label, now called Coyote Entertainment. She has recorded 15? albums. In 1983 she joined Fleming and Associates, a major independent acoustic music agency, and by the following year was headlining folk festivals across the country. Performing along side talents such as Stan Rogers, Ferron, Valdy, Roy Forbes and Stringband, Connie’s music contributed to a newly emerging and distinctly Canadian sound.

Connie has toured extensively ever since, bringing her music all over North America and to India, China and Europe as well. She has shared the stage with innumerable artists, including Shawn Colvin, Tracy Chapman, Sylvia Tyson, the Chieftains, and Daniel Lanois. In 1984 she received a Most Promising Female Vocalist Juno nomination for her album Moonlight Grocery, and Lullaby Berceuse took home Best Children’s Album in 1989, as well as the 1990 U.S. Parents Choice Award. She took Best Children’s Album again in 2004 with a new book/cd format entitled A Duck in New York City. In 2000 Love is a Truck was nominated for a Juno in the Folk Roots category.

This versatile performer also penned the prairie musical ‘Dust and Dreams’, and has written music for both dance and theatre productions. She co-wrote and performed the theme song to the animated television show ‘For Better or For Worse’, which debuted on Canada’s Teletoon network in 2000.

In 2002 she received the Queen’s Golden Jubilee medal, in recognition of her outstanding contribution to the arts in Canada.

In 2003, Connie hosted Connie Kaldor @ Wood River Hall, a thirteen part television series showcasing Canada’s finest folk and roots music performers. The title of the show is taken from what is probably Connie’s best known song, Wood River, from the 1992 album of the same name. Considered by many to be the quintessential Saskatchewan tune, it was named one of the top Canadian songs by Canadian Geographic Magazine. Recorded live, the show presents a rich variety of music, from the extraordinary songs of Bruce Cockburn and Sylvia Tyson, to James Keelaghan, Blackie and the Rodeo Kings, The Duhks, the Wailin’ Jennies and more. Look for broadcast times and dates at www.visiontv.ca (still?)

Her 2005 c.d. Sky with Nothing to Get in the Way is full of pure prairie imagery, and seems an apt release for the year in which she sang at the Saskatchewan Centennial for her Majesty Joni Mitchell as well as the Queen of England.

The new album, Postcards from the Road, has just been completed and is sure to be a favourite with fans new and old.

Married in 1990 to music producer and Hart Rouge member Paul Campagne, the couple live in Montréal, Québec with their two sons, Gabriel and Aleksi, who show signs of being as talented as their parents.