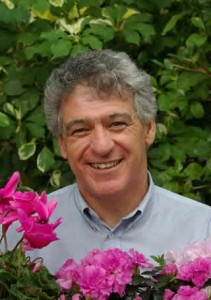 Recently retired after 30 years of outstanding achievement in the field of Canadian horticulture, Ed Lawrence’s tenure as Chief Horticultural Specialist to six consecutive Governors General spanned a period of vice-regal history dating from Jules Leger in the 1970s to Adrienne Clarkson in 2005. In his capacity as head gardener, Ed’s responsibilities included not only the oversight of the 85 acre historic grounds and greenhouses of Rideau Hall, but of all six official residences under the authority of the National Capital Commission, including those of the Prime Minister and the Leader of the Opposition.

During that same period, Ed’s gardening expertise gained popular recognition through CBC Radio’s “Ontario Today” noon-time gardening phone-in show heard every Monday. After more than two decades, enthusiasm for Ed’s down-to-earth practical advice shows no sign of waning, making the Monday gardening hour one of the longest-running and most successful features in the annals of Canadian broadcast history.

His on-air popularity has led to other appearances on numerous radio and television gardening programs, including The Hobby Garden, From a Country Garden, The Canadian Gardener, and Vie de chalet on Radio-Canada. In the summer of 2001, Ed hosted a 13-part television gardening series, “The Gardener” produced in partnership with the National Capital Commission in Ottawa and WPBS TV in Watertown, New York. Ed has written gardening columns for newspapers throughout the Ottawa Valley and a weekly column for the Toronto edition of the national newspaper, The Globe and Mail.

In 1988 he won Landscape Ontario’s Garden Communicators’ Award for his broadcasting work and in 2000, Ed was the recipient of the prestigious Award of Merit from the Ontario Horticultural Association. Toronto-born and Humber College educated, Ed now resides on a farm in the Almonte, Ontario region and continues to share his gardening know-how through a broad range of national and community-based horticultural endeavours.

Ed’s book is available throughout Ontario
at your local independent bookstore or garden centre,
at all Chapters, Coles, Smithbooks locations,
and online at Indigo.ca