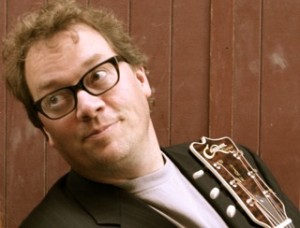 Based in Peterborough, Rick Fines is one of Canada’s leading blues, roots and slide guitarists. A veteran of the North American folk and blues circuits, Rick has won the Maple Blues Award as a solo artist, and has won a Juno Award and several Thomas Handy Awards for his work with the band Jackson Delta. Known for his virtuosic fingerstyle and slide guitar playing and his engaging stage presence, Rick delights audiences with soulful songs, wonderful stories and a mesmerizing musical experience.

Rick has worked as a youth mentor at the Winnipeg Folk Festival and is a regular participant in Ottawa Bluesfest’s popular “Blues in the Schools” program. His obvious love of roots music is an inspiration to all. Listeners are fascinated by his playing, singing and songwriting skills, as well as his vast knowledge and love of the musical and social history of the blues.

Rick’s acclaimed CDs include “Nothing Halfway“, “Out Of The Living Room“, “Arcadia” and “Live At The Harvest “. He has also recorded an instructional DVD to share his exceptional guitar techniques.