The name of the group, Siqiniup Qilauta roughly translates to The Sun’s Drum. The name was influenced by an Inuit legend they heard about the sun. When the sun has a complete halo around it, it indicates good luck and the halo represents a drum.

The group is located in Ottawa, Ontario, and has travelled nationally and internationally.

Traditional Inuit Throatsinging is a game or competition usually done with two women. There is a leader and a follower, the leader sets th 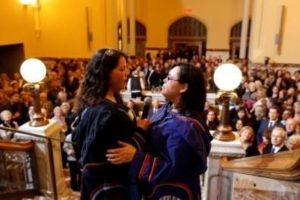 e rhythm, the pace and the sound, and the follower repeats the sound. Each person is trying to ‘trip up’ the other and therefore, the songs normally end in laughter.

Inuit Drum Dancing was mainly done by men as a game or competition as well as for celebrations. Lynda and Heidi are contemporary drummers who sing traditional songs in Inuktitut.

Inuit Games have always been about strength, endurance and stamina, often testing people’s ability to withstand pain. Inuit Games have helped Inuit survive in a harsh environment and nowadays are played for fun and competition.

Inuit Cultural Presentations last about an hour and are more in-depth on where Inuit live in Canada, recent history, common cultural practices, challenges and strengths.