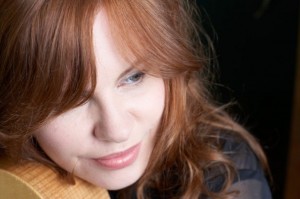 A Saskatoon native living in Toronto, Canada, Suzie Vinnick is the owner of a gorgeous, powerful
voice and performs with a sweet mixture of engaging candidness and unparalleled musicianship.
Suzie’s recent accolades include:

Suzie performs powerfully as a solo act, as a duo or as a full band. She has toured nationally with Stuart McLean’s The Vinyl Café and the John McDermott Band. Suzie made her New York City debut in 2011 supporting John Hammond at a free outdoor stage in Madison Square Park Conservancy and has performed for Canadian Peacekeepers in Bosnia and the Persian Gulf.

She was also the voice of Tim Horton’s for 5 years. Suzie’s latest full-length release is a solo acoustic blues album entitled Me ‘n’ Mabel which was produced by Danny Greenspoon; and in May 2012 she released Live At Bluesville which includes 8 blues, roots and gospel songs that were recorded by Bill Wax at Sirius/XM in Washington, DC.