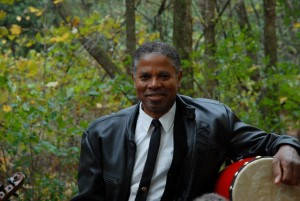 Drummer/percussionist WAYNE STOUTE comes from Trinidad, which is the most southerly island in the Caribbean. “The land of steel band and calypso”, it is situated a mere eleven miles off the coast of Venezuela, South America. Because of the cultural pot-pouri of this former British colony, WAYNE grew up listening to the British Top of the Pops, American top 40, rhythm & blues, the Bollywood hit songs, rocksteady and reggae from Jamaica, the music of Venezuela, Brazil and without a doubt, steel band and calypso music. He moved to Brooklyn in his late teens where he met Ross and Andre Whiteman and joined their band, which eventually evolved into JAB JAB.

He studied at Drummer’s Collective in New York City and Concordia University, Montreal from which he has a Bachelor of Fine Arts degree with a major in music. Wayne has worked with some of Quebec’s top performers. He has toured with Joanne Blouin, toured and recorded with Karen Young, Haitian Pop singer Emeline Michel, South – African singer Lorraine Klaasen, blues and R & B singer Kenny Hamilton, reggae artiste Kali & Dub Inc. and has also recorded and performed with The Montreal Jubilation Choir (the album “Jubilation V: Joy To The World” won a Juno award).

He has had the opportunity to work with most of the World Music artistes on the Montreal scene as well as the late Chicago bluesman Big Moose Walker. He has recorded sound tracks for television shows as well as the films “Taxi to L.A”, “Love and Human Remains” and the NFB production of “Christopher Changes His Name”.

In addition to this he can also be heard on the JAB JAB cd “Jump Up And Jam” which is rich in color and rhythm, mixing the styles of Reggae, Compas, Zouk and Soukouss in an energetic base of Soca. This CD was nominated for an ADISQ award in the World Beat category in 1996.

Wayne has been playing drums and percussion with Terry Gillespie since 2009.